NEW DELHI: The government is set to introduce a law to guard against human trafficking, proposing a 10-year punishment for those engaging in “aggravated forms of trafficking” while seeking life imprisonment for repeat offenders.
A bill to identify various forms of trafficking, including for the purposes of bonded labour, sexual exploitation, pornography, removal of organs and begging, has proposed severe punishment for those engaging in the heinous crime.

The Trafficking of Persons (Prevention, Protection and Rehabilitation) Bill 2017, initiated by the Women & Child Development Ministry, is currently with a Group of Ministers (GoM) that will take a final view on the matter, official sources told TOI.

The bill proposes the establishment of a national anti-trafficking bureau, which shall be entrusted with the gamut of issues aimed at controlling and tackling the menace under various forms. These include coordination, monitoring and surveillance of illegal movement of persons and their prevention. The bureau will also be entrusted with increasing cooperation and coordination with authorities concerned and organisations in foreign countries for strengthening operational and long-term intelligence for investigation of trafficking cases, and driving in mutual legal assistance. 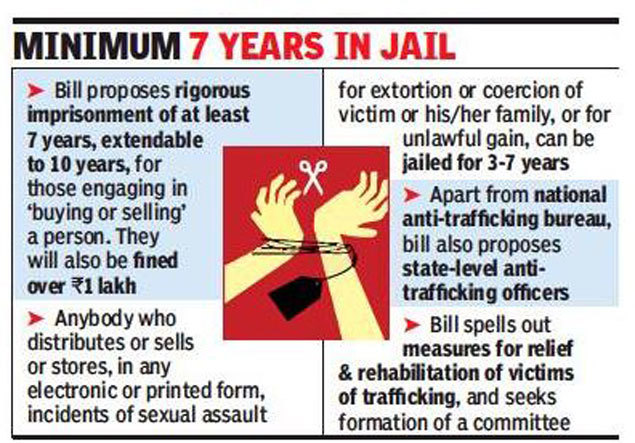 Listing out the ‘aggravated forms of trafficking’, the bill speaks about offences such as forced labour, or bonded labour, by using violence, intimidation, inducement, promise of payment of money, deception or coercion. Also, it mentions trafficking after administering any narcotic drug or psychotropic substance or alcohol, or for the purpose of marriage or under the pretext of marriage.

The aggravated form also includes trafficking for the purpose of begging or forcing those who are mentally ill or are pregnant. “Whoever commits the offence of aggravated form of trafficking of a person shall be punished with rigorous imprisonment for a term which shall not be less than 10 years, but which may extend to life imprisonment and shall be liable to fine that shall not be less than Rs 1 lakh,” the bill proposes.

For repeat offenders, it suggests imprisonment for life “which shall mean imprisonment for the remainder of that person’s natural life”, apart from a fine that will not be less than Rs 2 lakh.

As per data released by the National Crime Records Bureau (NCRB), human trafficking numbers rose by almost 20% in 2016 against the previous year. NCRB said there were 8,132 human trafficking cases last year against 6,877 in 2015, with the highest number of cases reported in West Bengal (44% of cases), followed by Rajasthan (17%).

Of the 15,379 victims who were caught in trafficking, 10,150 were female and 5,229 males. NCRB said the purpose of trafficking included forced labour; sexual exploitation for prostitution; other forms of sexual exploitation; domestic servitude; forced marriage; child pornography; begging; drug peddling; and removal of organs. It is believed that the numbers recorded by NCRB are a far cry to actual incidences of trafficking as many cases went unreported with many people still unaware of the crime or lacking confidence to seek police help.

For those engaging in ‘buying or selling’ a person, the bill proposes rigorous imprisonment for a term not less than seven years which can be extended to 10 years with a fine upwards of Rs 1 lakh. The bill also seeks punishment for those engaging in trafficking with the help of media, including print, internet, digital or electronic. It stipulates a punishment of not less than seven years which can go up to 10 years and a fine not less than Rs 1 lakh.
“Whoever distributes or sells or stores, in any form in any electronic or printed form showing incidence of sexual exploitation, sexual assault or rape for the purpose of extortion or for coercion of the victim or his/her family members, or for unlawful gain, shall be punished with rigorous imprisonment for a term which shall not be less than three years but may extend to seven years.”
Apart from the national bureau, the bill also aims at having state-level anti-trafficking officers who shall also provide relief and rehabilitation services through district units and other civil-society organisations.

The bill also spells out measures towards relief and rehabilitation for the victims of trafficking, and seeks the formation of a committee for this purpose. The committee is proposed to be headed by the women & child development secretary and would have members from the ministries of home; external affairs; labour and employment; social justice and empowerment; panchayati raj; and heath and family welfare.